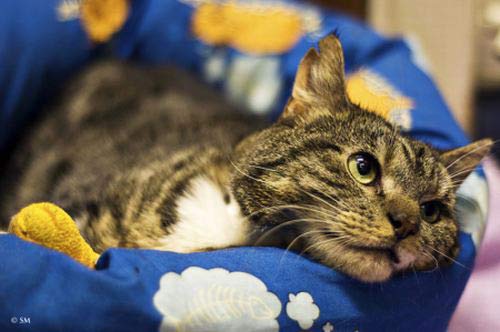 Attacks by dogs on cats is a problem in London. Irresponsible and inexperienced owners allow their dogs to roam the streets off the lead and when their dogs chase cats they are unable to control them.

Many of the dogs do not just chase cats but are catching them causing serious injuries or death. In some cases dogs are jumping front garden gates and attacking cats in their own gardens. Some witnesses have report deliberate attacks where owners have encouraged their dog to attack cats.

A lady ran into our clinic to tell us that a cat had just been attacked by a dog in the side street and then as he escaped had been run over. We raced to the scene but couldn't find him, we continued an extensive search of the area over the rest of that day and night and distributed over 100 posters in our search for him.
Five days later he was discovered in a garden, he was virtually collapsed suffering with multiple infected bite wounds to his legs and bruising. After initial urgent veterinary treatment Kermit was cared for at our Canning Town veterinary clinic where he required a long course of antibiotic treatment and daily wound cleaning and dressing. We named him "Kermit"
Kermit was very frightened but soon became relaxed and very friendly, he had clearly once been a pet but no owner came forward to claim him and once he recovered he was rehomed.
We advise that cat owners do not let their pets out on to the street or into communal areas but instead try to encourage them to stay in back gardens.