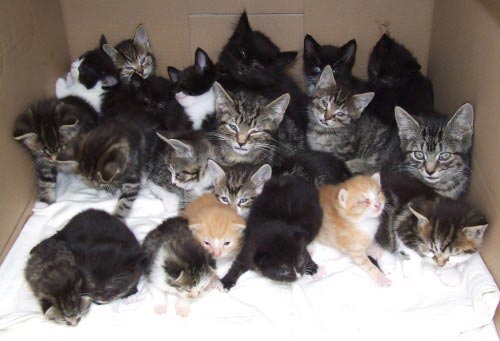 We received a call asking us to take in three cats and a litter of kittens because their owner was returning home the following day to the Ukraine as his employment in the U.K had ended.

We attended and found that he had 23 kittens and six adult cats! On arrival in the U.K he had acquired two kittens one of each sex which he had not neutered, they soon produced a litter of kittens and then this year the parents and four of the female 'kittens' had given birth!
None of the cats were vaccinated either and the kittens were suffering with terrible cat flu.
We brought them all into our care where it was a round the clock marathon task nursing the sick kittens back to health. The kittens had severe conjunctivitis and were very congested, after gently bathing their eyes and noses several times a day we would then apply antibiotic eye ointment. They all required courses of antibiotics and the sickest kittens also needed hand feeding and/or syringe feeding because they couldn't smell their food and were not eating enough.
Sadly two kittens were too weak and did not survive, the others made a full recovery and found new homes.

Did you know? If a female cat was to mate every time she came into season, and all her kittens were to survive and breed, then there could be up to 21,000 extra cats in just 7 years.
Cats can live 18 - 20 years and dogs almost as long, so it's not surprising that there is a shortage of good homes when so many people let their pets have litters without a thought as to what will become of the kittens or puppies in the long term.
Neutering as many cats and dogs as possible is the only humane solution to the pet over population problem.